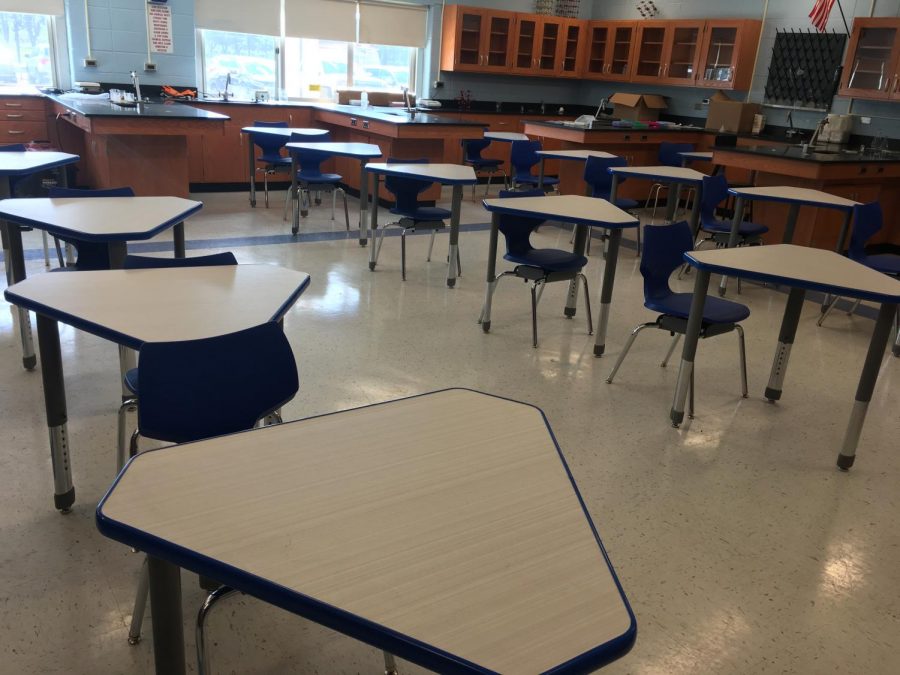 Northport High School’s science rooms saw a major overhaul this past summer, with the intent of providing students with a more “hands-on science experience,” says Science Department Head Mr. David Storch. A total of 10 different science rooms in the lower S-wing (6 chemistry rooms, 2 physics rooms, and 2 biology rooms) were given the renovative treatment, being updated with a plethora of new equipment and features. Physics rooms now feature desks with built-in electrical outlets and inserts that facilitate the configuration of laboratory equipment, allowing students to work while still paying attention to the lesson being taught. Also present along the the edges of the physics rooms are large, wall-sized “ideation boards-” wipe-off boards designed to allow students to flesh out concepts and ideas using a visual medium. Students will also notice the odd, wedge-like shape of the desks in their chemistry rooms, which are designed to fit together in groups of up to six to encourage students to work with one another on various activities. “[One of] our primary efforts was to increase classroom space,” says Mr. Storch, who emphasized the importance of the increase in size that many of the rooms got during the renovations. This size increase will allow more space for students to work, experiment, and utilize the vast array of resources available to them as a part of their science experience. In addition to the changes that were made to the already-existing rooms, several new rooms were constructed in the science wing, including a marine biology research room, a medical anatomy and physiology annex, and a multi-media center for technology based education. “Many of these annexes were once storage space,” says Mr. Storch. Now they’re actively accessible to students.”

The marine biology annex features several aquarium tanks for students to raise and study marine life for their own research, and the medical annex is even set to include a virtual reality system that can simulate biological dissection of cadavers. “The multi-media center is meant to be a flexible space for students and teachers to collaborate with technology,” says Mr. Storch, who envisions the location as a place for students to learn and study using a variety of digital mediums.

The classroom environment itself was not the only aspect focused on by the renovation project however, as even the chemical waste management systems used to dispose of leftover chemicals and unwanted byproducts from the labs was given a modern update. Chemistry rooms are now each equipped with one sink designed specifically for the purpose of getting rid of chemical waste, and all disposed substances will then be stored safely in a large tank buried deep underground until they can be emptied out by a waste management crew. The entire management system will be “rigorously monitored,” says Mr. Storch, to ensure the safe and organized containment of these substances.

“Perhaps the hallmark of this renovation is the greenhouse,” says Mr. Storch, “which will be a botanical center for the entire district.” This greenhouse, which is set to open some time in late 2018/early 2019, will allow students from all grades and across the school district access to a revolutionary hub of natural sciences. Some initial plant growth will be done in the spring to kick off Northport’s foray into the realm of botany. For more information about the greenhouse project, check out our in-depth coverage of it here

A great deal of thought and effort was put into ensuring that this renovation enriched students’ educational and laboratory experiences. “There’s always room for more,” commented Mr. Storch, “but for a renovation of such a specialized environment, the Northport East-Northport School District achieved a great deal.