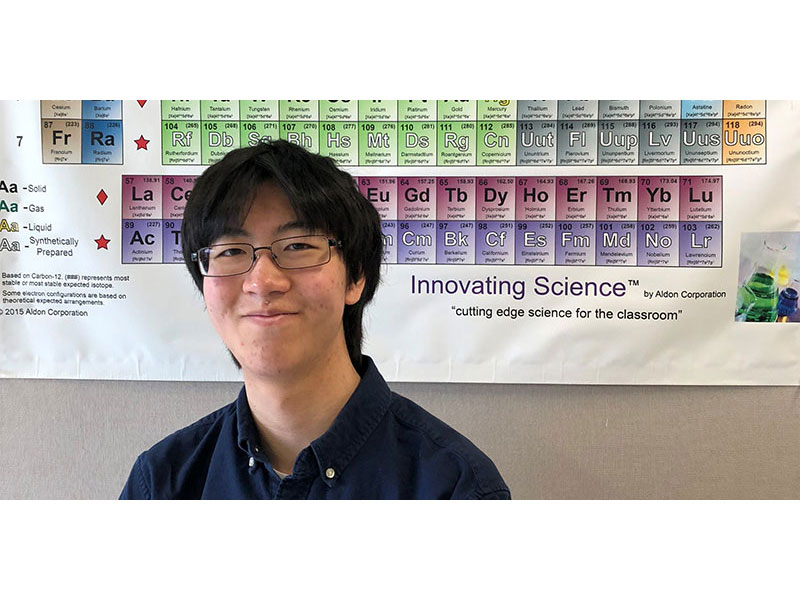 The following are direct quotes from Northport High School student Nathaniel Wang in response to the questions he was asked during the interview.

Q: What is your favorite subject in school? Have you always liked this subject? Why do you like it? Have you ever had any challenges with it?

A: They are all pretty interesting. What’s the point of taking a class if you’re not interested in it? Web Architecture is fun. Digital Design is more fun than I thought it would be. Cybersecurity is what I expected in a good way. I am part of AOIT so one could say that I am fairly technology oriented. I like these classes because they are fun. Fun things are fun.

Q: What are your out-of-school or extracurricular activities?

A: Mathletes, Science Olympiads, Cyber Patriots, Research. This year I am doing research at the Cold Spring Harbor Laboratory, It’s a pretty cool place. I am doing research on the Lateral Amygdala. Working with the scientists is pretty fun. I like it because it’s interesting and you get to contribute to the wider scope of human knowledge and the narrower scope of personal knowledge. [But] my primary occupation is a student.

Q: Have you won or been nominated for any awards?

A: I am a National Merit Finalist. We took the PSAT and we wrote an essay and they were good enough. In November, 2018 I was the [district’s] “Math Student of the Month.” I have never won any significant research achievements but one time I won an Honors Award at the Long Island Science Congress. Through Science Olympiads I won a few things. For example, fourth place in the chemistry lab and third place in electrical engineering.

Q: What colleges have you been accepted into? Where are you still waiting to hear from? Where do you really want to go?

A: I have been accepted into Northeastern, Stony Brook (they are my safeties). I received a likely (which is basically an informal acceptance) from Cornell (a target reach). Rejected from MIT. Johns Hopkins waitlisted me, UChicago said go away, University of Illinois at Urbana–Champaign waitlisted me. Waiting for all of the Ivies except Dartmouth (I did not apply there). Applied Early Action to UChicago and MIT, I should’ve done more but I am a slow writer and my essays are not good. My dreams have been crushed and shattered because MIT DOESN’T LOVE ME!! At this point I will take anything, like one of those lobsters that live at the bottom of the ocean. I would probably go to the Princeton if I get accepted because not only are they expanding their computer science program which I am interested in, but they’ve also got some pretty interesting eating clubs and I am a big proponent of good food. It’s got a great campus and they’ve got a high school nearby that whooped our butts in a programming competition. I am looking forward to college. I probably want to major in something involving computer science because computers are fun and quite frankly they are easier to deal with than most people. Realistically speaking, computer science is really broad. I want to figure out what I want to specialize in. Cornell, for example, has a game design program. I could also take the route of applying my computer knowledge to computational linguistics–using computers to analyze various aspects of language. I am going to take my computer science [knowledge] and use it in a interdisciplinary sense because pure computer science is kind of like pure mathematics with some electronics involved and that is kind of terrifying. I don’t know what I want to do for a job. I don’t know where I am even going to college. After I get my undergraduate degree, I am probably going to go for a higher level degree-that is unless I start a business when I am in college. I have given up trying to predict what’s going to happen in my life. My business might be one of the a million “.com” start ups out there or it could be a bubble tea shop.

Q: There are rumors circulating around that you might be the Class of 2019 Valedictorian. What is your response to these statements? Are you excited?

It’s probably going to be Katie [Sierra]. But you know, whatever happens, happens. We’ll see.

Q: What was the hardest part of the college application process for you? Why?

Literally everything. All of it. The whole process. At its core, the college application process is about reviewing what you’ve done in your life up to this point and taking it in a way that does not make you look like a complete idiot which I find difficult to do at times. But, I guess outside of the tedious forms (the application is just a list of forms), the essays and the interview are probably the most challenging. I don’t think I am alone in that opinion. It [the college application process] haunts me to this day.

Q: Because of the amount of activities you were involved in and the rigorous courses you took, you were probably stressed and overwhelmed at times during your high school career. What did you do to de-stress and manage these difficult times?

I didn’t. I didn’t get much sleep. [Here’s what I have to say to that:] “Welcome to high school! How may I take your order?” I spend my free time on programming projects for fun. I make exquisite corpses1 for fun. Sometimes I sit down in a dark room and just stare at a monitor for hours on end.

Q: What was the hardest part of your high school experience? Do you wish you had done anything differently? Why? What decisions are you most proud of?

Motivation. Definitely motivation. Or maybe that’s just this year. Also, balancing what you’re supposed to do with what you want to do. For example, I am fully aware that I should be spending my time not on the internet doing nothing, but that is what I do anyway. It’s not healthy. You could actually call it psychologically and physically unhealthy. Talking to people is also hard. ‘Cause people are like egg rolls. They are full of meat (literally) and they’re crispy and fried and when you try to talk to them, sometimes they don’t talk back. I wish I had done basically everything differently. I wish I talked more. [I wish] all the time I did nothing productive I did the opposite with that time and did something to benefit literally anyone in this world. I guess [I am proud of the] one time I played tennis for the [Northport] JV team. I started as “First Singles” and then I ended the season as “Fourth Doubles.” I’m proud that I tried tennis, but not proud that I didn’t put in more effort. I’m proud of being alive. [I am a] proud member of the Northport community.

Q: What do you like to do in your free time?

Pen turning. That’s when I take a chunk of wood or plastic or both and I basically put a hole through it and then I take that hole and put a rod through that hole and put the rod on this spinning machine called a lathe. Its like non-edible cotton candy and then you take chisels and then stab them into the wood. And then after a few hours of anguish and a little bit of varnish you have a usable pen. On occasion, if I’m feeling particularly “out of it,” I’ll build model ships and it’s good because they are adorable and they are tiny and have little details and you can put them on a table and say ‘this killed people’. [I also work on] programming projects, there are different projects such as the corpse1. I wrote a program bot that uses a messaging service to coordinate the creation of an exquisite corpse1 across the vast domains of the internet. That’s a pun. Puns are important for your life. Once in a while, I might even go outside where I just… exist.

Q: Is there anything else you’d like to put out there that wasn’t covered?

I would like to say that consciousness is a sham, and America is collapsing. God bless the United States of Begonias. The Dodo [Bird] only went extinct because it wanted to. Fire alarms would look a lot less menacing if they were hot pink.

“Bubble tea is freakn’ dank.”
“The toxins in my brains, they speak to me.”
“Heated exchanges are good ’cause you can cook noodles on them!”
“You can’t force times distance your way through life.”
“Oxygen has feelings TOO!”

Footnotes:
1: “Exquisite Corpse” is a kind of collaborative drawing project where each contributor can only see the comic panel that was contributed immediately before them. (TL;DR: Art telephone)