Breaking Down The Green New Deal 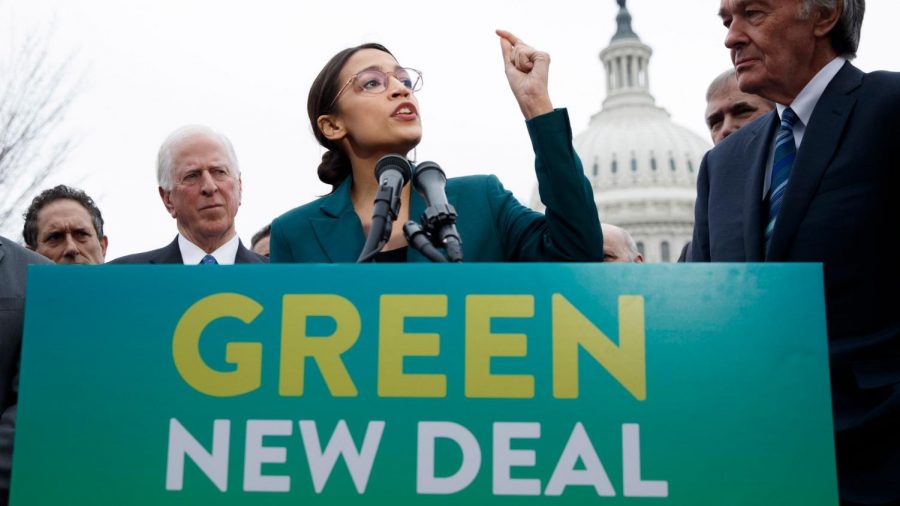 Since January 3, 2019 Alexandria Ocasio-Cortez(AOC) has been a New York Democratic congressional representative. She has been pushing a new bill called “The Green New Deal” that will present solutions for climate change and protection for the environment. The bill also plans to use the money from wealthy Americans to fund the bill and make many socialist reforms for the economy.

What Will It Do?

“The Green New Deal” plans to do many things but there are a few central reforms and proposals that can summarize the entire bill.

1) Provides all the people of the United States with high-quality healthcare, affordable safe and adequate housing, economic security, and clean, water, air, and food.

2) Ensures that all public lands, waters, and oceans are free of contamination.

3) Provides higher education to all the people of the United States.

4) Builds new or upgrades the existing infrastructure of the United States.

What Will It Cost?

The plan is estimated to cost $51-$93 trillion dollars or $600,000 per household. This would put an enormous amount of stress on the economy. “The Green New Deal” would double or nearly quadruple the national debt of the US right now ($22 trillion as of March 2019). AOC also plans to tax anyone who makes over 10 million dollars a year by a rate of 70%. The wealthy aren’t the only ones in danger because of The Green New Deal. For people to be “ensured high education and healthcare,” the common person will be paying ridiculous taxes.

“The Green New Deal” will take years to go into effect. AOC plans for America to have net-zero carbon emissions by 2050. Additionally, America’s infrastructure would take an unpredictable amount of years to repair and rebuild. Not only would AOC’s plan take years, but it will be nearly impossible to repair and rebuild infrastructure in large cities like New York and Chicago without interfering with the schedules of businesses and jobs.

What Do People Think?

“The Green New Deal” has become a controversial and heated topic among a lot of people. On social media sites such as YouTube, Instagram, and Twitter, people have been very outspoken on what they believe is the right move to make. Some think that it will lead to a global utopia while others think it will bring the states to a more socialist solution.

What Are Opinions On The Political Right?

An example of a right-leaning view is Ben Shapiro, conservative commentator and writer. He has voiced his opinion on “The Green New Deal” both on his website The Daily Wire and his YouTube channel of the same name. He has written several articles on the deal and has said a few choice words about the person most associated with the deal, Alexandria Ocasio-Cortez. Shapiro has called the deal “not just radical” but “utterly impossible.”  It seems that the majority of people leaning right have also described The GND in a negative light, with the website renewedright.com polling her approval rating at just 3% positive. A problem a lot of people have with “The Green New Deal” is that there is not really a well-defined plan to solve the problem of pollution. Several people, including California Senator, Dianne Feinstein, are concerned that there is not a good way to pay for the deal.

What Are Opinions On The Political Left?

On the other side of the political spectrum, the majority of people who lean more left are seeing the deal as a great thing. The plan does have a lot of good things mentioned in it, such as emphasis on using solar and wind technology as an alternative energy source. Organizations such as the Sun Rise Movement have expressed their support for “The Green New Deal.” On Twitter, they’ve said that we should “go big or go home,” and that “the only realistic solutions are the ones that match the scale of the problem, like a #GreenNewDeal.” They want people to understand that this is an issue, also saying, “If your plan doesn’t create 45% emission reduction by 2030, then your plan has failed to grapple with reality.”

What Do You Think?

We’ve explored what political figureheads on the left and right have to say about the Green New Deal, but what is your opinion? Do you think it’s good or bad? Is it a path towards a more socialist America or is it the only way to solve this problem? Comment below and let us know.