A Season in Review: Interview with Andy Burget, Captain of the Northport Boys Swimming and Diving Team 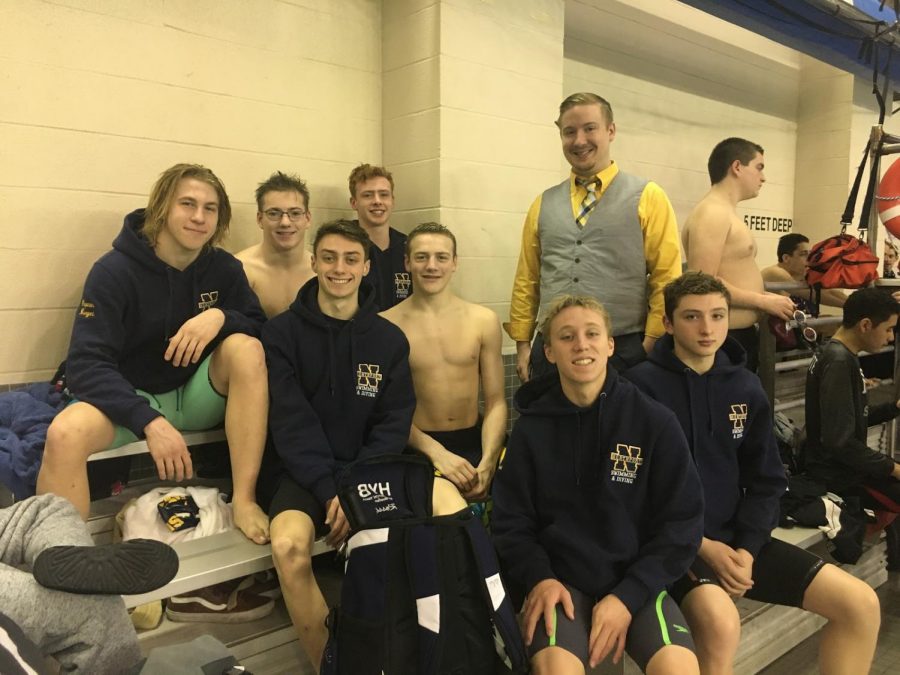 Northport’s Boys Swimming and diving team placed 3rd at the section XI league championship on Thursday, January 30th, after a great season. Andy Burget, senior captain of this year’s team has been swimming since it began, starting from when he was in eighth grade. I recently was able to sit down with Andy and he shared with me how meaningful the team has been to him as well as his feelings on how the season went this year.

Q: How has this season gone so far? Are you proud of how the team did this year?

A: Yes, I feel the team has come a very long way throughout the season from the beginning to now and I’m very proud of them. This year’s team was a little different than any teams in the past. We lost a few really great swimmers when they graduated a few years ago who had been the backbone of the team for many prior years, so it was a little difficult to come back from that big loss. We also gained a lot of new swimmers this year who have never swam for a team before. It was definitely a tough transition for these swimmers but they worked so hard right off the bat and really gave their all to Northport swimming, so i’m very proud of them. We also had some boys with really amazing times this season, and broke a lot of records. One swimmer that stood out to be in this respect was Braden Greenberg, who swam a sub 30’ in the 50 Freestyle. Something that is incredibly difficult for someone who doesn’t swim club to do, being somewhat of a personal barrier.

Q: You’ve been on the team for 5 seasons, but how has this season been different than the rest being a captain?

A: Being a captain was definitely a big deal for me. I love swimming so much, it’s a huge part of what I do and I feel like it’s been such a learning experience for me personally. I truly enjoyed this season so much, which goes for the other two captains as well: Dylan Karf and Kevin Penrose. I feel like all three of us have really given our all to the team and did our best to set an example of what the younger teammates should look up to. We always came excited for meets and did our best to hype up the team. Many might say that it’s unusual for a team as small as ours to have 3 captains but I think that each of us bring something different to the team. Dylan and Kevin are extremely passionate and are the embodiment of what you want swimmers to be. They consistently kept great attitudes towards the team which made a great atmosphere for working out and competing.

Q: What’s your favorite memory from the season?

A: Definitely our third place win at leagues. The last two years we had some really good swimmers that have since graduated. It was definitely difficult in the beginning to overcome those big losses, and I’m very happy with how hard the team worked to get where we are. More than half the swimmers on the team this year don’t come from as competitive of a background than some of the prior teammates, however they all still remained so dedicated to the team and really gave it their all at the League championship, putting us at a great spot in the section XI rankings.

Q: Let’s talk more specifically about leagues. I know this was definitely a high point in the season, could you tell me a little more about that experience?

A: Leagues was held at Hauppauge High School on Thursday, January 30th. I competed in three events, starting off with the 50 backstroke leg of the 200 Medley Relay. I then competed in the 200m individual medley where I came in 6th out of 24. Then ended with the 100 backstroke. As a team I was very proud of our outcome. We had some really great swims and the team did so well supporting each other, putting us at 3rd place overall. One teammate that stood out to me at the meet, as well as for the rest of the season was Jonah Gold. He was brand new to the team as he moved here earlier in the year from New York City. He didn’t know anyone coming onto the team and it was his first season competing for his school at meets. However he was a huge part of the team as he was a constant source of energy and was always excited to be there. He helped the team a great amount at the league championship as he PRed in his 100m backstroke, really showing how much he has improved throughout the season.