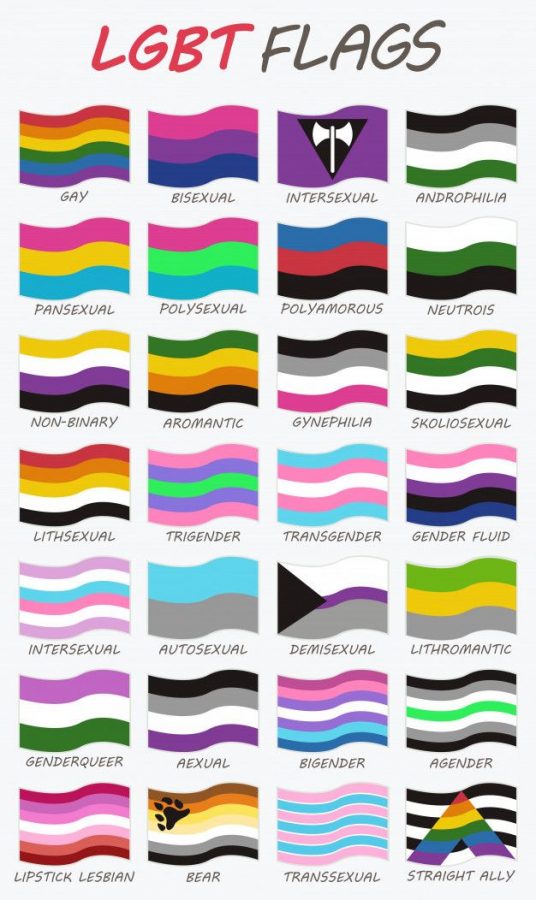 The “+” in LGBTQ+ covers the multitude of other genders and sexual orientations that LGBTQ+ community members may use to identify themselves.

LGBTQ is an acronym for Lesbian-Gay-Bisexual / Biromantic-Transgender-Queer. The “+” covers the multitude of other genders and sexual orientations that LGBTQ+ members may use to identify themselves. It is well known that a woman who is sexually or romantically attracted to other women is lesbian, and a man who is sexually or romantically attracted to other men is gay. Someone who is Bisexual or Biromantic is sexually or romantically attracted to both men and women — regardless of his or her own gender. People who are transgender were — as all humans are — born a male or a female, but at some point during their lives, realized that they better identify as the opposite gender. Members of the transgender community often change their names and pronouns to match their gender identity. For example, someone originally named Sarah who used to use “she / her” pronouns may now be called Jacob with “he / him” pronouns. In this case, Sarah becomes Jacob’s “deadname”.  Queer is an umbrella term for the entire LGBTQ+ community.

Many of these critics lack an understanding of the life of an LGBTQ+ community member. Emily*, an 18-year-old transgender female, describes gender dysphoria through a metaphor of a scarf: “Imagine your grandmother comes to pay a visit, and she brings you a handmade scarf. You can obviously tell it is a beautiful scarf with a lot of love put into it, and you like it, however you simply are not a scarf kind of person. You don’t wear scarves, it just isn’t for you. You aren’t against them, there is nothing wrong with scarves, or the one your grandmother made, it just isn’t you. That’s what gender dysphoria is for me. There is nothing wrong with being a male, it just isn’t me; I am a girl.”

Emily’s friend, Max*, has been openly transgender for a little over a year. In response to those who claim that being transgender is a sin, choice, or phase, Max elaborates on Emily’s scarf metaphor. “I don’t know what else to say. The tormentors [bullies at my school] claim that I can just… not be a girl, and that isn’t how it works. Yeah, I can wear the scarf Grandma knitted, and look happy, but in truth, I hate it, and want to get it off. I didn’t choose to be like this. I didn’t randomly decide to be a girl, but now, [deadname] is truly dead, and I, Max, am very happy.”

* Names have been changed due to the personal and sensitive nature of this topic.