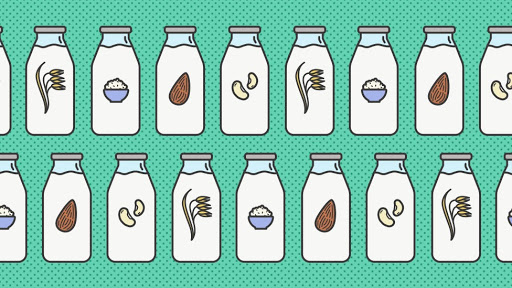 In recent years, dairy alternatives — from milk made from almonds and coconuts to that made from soy, rice, and oats — have soared in popularity.

Around 65% of people have some form of lactose intolerance. With a substantial portion of the population unable to digest lactose, the sugar found in milk, avoidance of dairy products is common. In recent years, however, dairy alternatives — from milk made from almonds and coconuts to that made from soy, rice, and oats — have soared in popularity. And while these alternatives may be a dietary necessity for those who cannot tolerate regular milk, they have become popular among vegans and those without any dairy consumption restrictions.

So, how do these dairy alternatives impact one’s overall health? And, what is the effect of alternative milk consumption on the environment?

Out of the milk options, cow milk contains the most protein. it also has a high calorie and fat content. Beyond national facts, many take issue with the way in which cows are raised. In order to mitigate the extent of animal cruelty, some go as far as to abstain from consuming milk. Even more, cow milk is the least sustainable of the milk beverages. The production of cow milk requires a large amount of land and water, and releases a sizeable amount of emissions. While the exact location of milk production certainly affects the toll on the environment, there is no doubt that avoiding dairy milk significantly reduces one’s carbon footprint.

Almond milk, which contains fewer calories than the other milks, provides a relatively insignificant amount of protein compared to that of cow milk. Besides the fact that those with nut allergies cannot safely consume the final product, almond milk production involves a substantial amount of water.

Soy milk, a plant-based milk is made from soybeans and filtered water, contains almost the same amount of protein per glass as cow milk. Soy milk, which may contain thickeners, also provides potassium and other important vitamins, as well as a significant amount of calcium. Soy production, however, often involves the use of GMOs, leading many to avoid soy consumption in all of its forms — not just as a milk alternative.

Another milk alternative is rice milk. Although rice milk appears to be a good choice for those with allergies to other forms of milk, it should not be consumed regularly; rice products contain inorganic arsenic levels and almost no protein.

A more fattening milk option for those with nut allergies is coconut milk. Coconut milk also lacks protein, but it can be fortified with vitamins and calcium.

Oat milk actually contains more riboflavin — and is a more sustainable option — than cow milk. Still, oat milk contains more calories than other plant-based milk alternatives, and those with celiac disease or another gluten intolerance cannot consume it.

While everyone has their preferences with respect to flavor, and one should consider personal health conditions prior to switching milks, any of the milk alternatives are more environmentally-friendly than cow milk. A wide array of options and easy access to information on the food production process enables the public to consider the environmental effects of its consumption — a factor that should not be overlooked.