Sorry We Missed You Is Humanism at Its Weakest Point 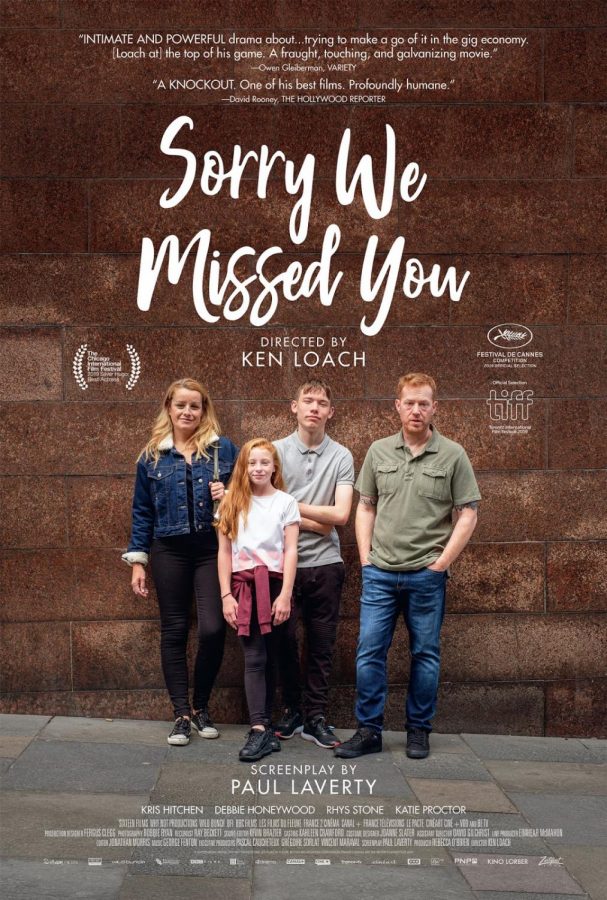 Director Ken Loach’s latest film, "Sorry We Missed You", is powerful in the moment, though his haphazard direction doesn’t seem to care about the characters enough to make them last after the credit’s roll.

Sorry We Missed You will, by any standards, not be missed. Humanist director Ken Loach has once again taken his camera to the lowly, repressed streets of suburban England, capturing a drama so painful, fragmented, and forgettable that one sincerely questions why he decided to make this film his last.

The movie follows an archetypal nuclear family of four as they traverse their way through modern England’s gig economy. The family lost everything in the Great Recession and has been floundering ever since. A standard in the storied canon of Loach’s career, Sorry We Missed You brings nothing new to a table in desperate need of something fresh.

The family’s hot-headed patriarch, Ricky (Kris Hitchen), has finally found work delivering a steady stream of parcels in his own recently purchased delivery van for a shipping company. While the company promises absolute freedom, touting their commitment to self-employment and free labor, Ricky soon realizes this is all a facade; he drives through the streets of England waiting for a chance that will never come. As a result, the family — and the film — becomes utterly disjointed, attributing its marital, familial, and legal problems to the start of this employment.

Hitchen dramatically overplays the character, morphing him into a formulaic, stereotypical conglomerate of every Loach character with which the director has come in contact. Ricky feels stale; Loach has worked with themes of sociopolitical repression for so long that one gets the feeling he has become immune to nuance. In an interview in 2011, Loach argues for the innate dramatization of the working class: “They live life very vividly, and the stakes are very high if you don’t have a lot of money to cushion your life… They’re the front line of what we came to call the class war, either through being workers without work, or through being exploited where they were working”. To his credit, Loach delivers this sentiment quite marvelously, even if his main character lacks considerable regard in the mind of the viewer.

A loving matriarch and caring wife, Abbie (Debbie Honeyland, in a pristine breakout performance) works as a home-care nurse, where her elderly clientele are nostalgic, demented and incontinent (at times, she is literally covered in crap). In contrast to Ricky’s flamboyant response when he is provoked, Abbie is rather stoic. Her persona lays downtrodden when faced with conflict; Honeyland does not truly shine until the end.

Abbie is exceptionally intriguing when with her children, especially teenage Seb (Rhys Stone), the film’s most fascinating character. Seb is a pimply-faced young anarchist who lives a life of petty crimes and graffiti. In his first film role (Loach is known to use non-actors for more realistic performances) Stone straddles a carefully-drawn line between misunderstood, angsty teen and laborious, petty criminal. While other characters may fall one-dimensional, screenwriter and longtime Loach collaborator Paul Laverty crafts the mold of Seb with astounding acuity, penning him as the seemingly sole three-dimensional human in Loach’s gargantuan England.

It is unfortunate that Loach and Laverty decided to wind the drama around Seb. The two make Seb an inconvenience in the life of Ricky, rather than explore the dynamic relationship between the son and his father, equally weighted. Loach has explored the pseudo-bildungsroman drama before; his 1969 breakout film Kes tells the exquisite story of adolescent Billy Caspar as he finds hope outside of his troubled family and life of petty crimes in the form of a falcon, the titular Kes. While Loach’s humanism in Kes suits the simple story perfectly, Sorry We Missed You’s humanism doesn’t quite land. For this, one can put fault on the actors’ one-dimensionality, or perhaps Laverty’s winding and frivolous screenplay. One can also place blame on Loach himself. His haphazard direction doesn’t seem to care about the characters enough to make them last after the credit’s roll.

Director Ken Loach — along with colleague and contemporary Mike Leigh — has served as a foundational staple in a genre of English cinema known as British social realism. Social realist films use British culture as a backdrop to shed light on such sociopolitical themes as industry, family values, and poverty. Loach’s most recent picture fits quite comfortably into that mold, though it is one of the most impersonal of the genre. Although British social realism lends itself to verisimilitude, great social realist films don’t stray too far from filmmaking. In Sorry We Missed You, Loach often devolves into a documentary style and forgets the wondrous poetry one can capture between the lines. Sorry We Missed You is devoid of poetry; it is strictly prose.

At times, it feels immoral to not emotionally invest in the characters’ despair. There is so much desperation, however, that one acquires a certain tolerance to the pain, and very little becomes memorable. Loach has always had a voyeuristic fascination with the trials and tribulations of the working class. He fetishizes their every inflection, every movement, until an audience’s return on investment dwindles down to precisely zero. That being said, it would be a petty crime in and of itself to discount the lengthy and — at times — mesmerizing career of Ken Loach; one must wholly respect the man’s dedication to his craft: his unflinching crusade towards the betterment of the blue-collar.

“Sorry We Missed You” is available to stream on Kanopy.