The Port Press • May 19, 2021 • https://nhsportpress.com/4781/entertainment/my-octopus-teacher-highlights-the-overlooked-intelligence-of-the-animal-kingdom/

My Octopus Teacher Highlights the Overlooked Intelligence of the Animal Kingdom 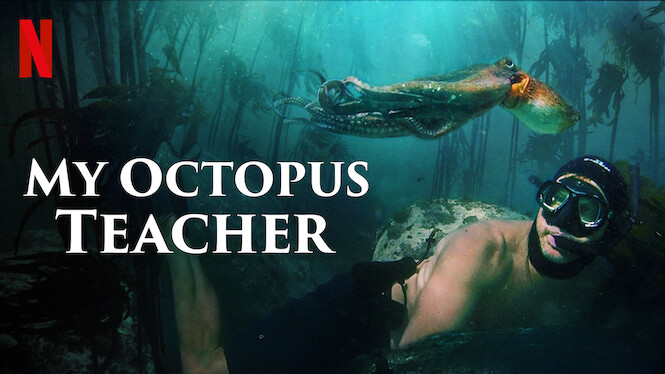 My Octopus Teacher explores the relationship between Craig Foster and an octopus, which Foster tracks throughout a kelp forest every day for a year.

Have you ever stared at an animal and wondered what they’re thinking? Or rather, what they’re not thinking? The phrase “intelligent being” sparks images of dolphins doing tricks, orangutans peeling bananas, and your dog comforting you when you’re down. But what intelligence lies behind the eyes of our fellow creatures? This question has stumped the minds of ethologists and zoologists for years.

While the query may seem trivial, it is a widely posited hypothesis, with much evidence stemming from the animal kingdom itself.

Rats and hippopotami have shown keen levels of empathy towards others, regardless of species. Squirrels display highly acute understanding of relationships and patterns, evident in their ability to sort nuts by size, color, and species. And monkeys and birds can implement homemade tools crafted out of materials from their natural world.

Perhaps the strongest example of superior animal intelligence is the famed octopus, brought to life by Netflix and filmmaker Craig Foster in the Oscar-winning documentary, My Octopus Teacher. The film’s title alone places the octopus on an intellectual pedestal — Foster studies the octopus to gain its intangible knowledge, as if the creature knows something he doesn’t.

The film explores the relationship between Craig Foster and the eponymous octopus, which Foster tracks throughout a kelp forest every day for a year. Along the way, Foster befriends, grows attached to, and — eventually — learns from the cephalopod.

The documentary vividly captures how the octopus deals with loss, revealing characterizations quite similar to that of the homo sapien. The octopus interacts with various fish, and when an unlucky shark-bite damages her tentacle, she wallows in depression. Throughout the film, Foster witnesses various predator attacks, the birth of her babies, and her eventual demise.

My Octopus Teacher professes a truth we already know: animals are, in fact, intelligent. Foster showcases just how these incredible beings and all of the animal kingdom relate ever closer to man — closer than one might think.