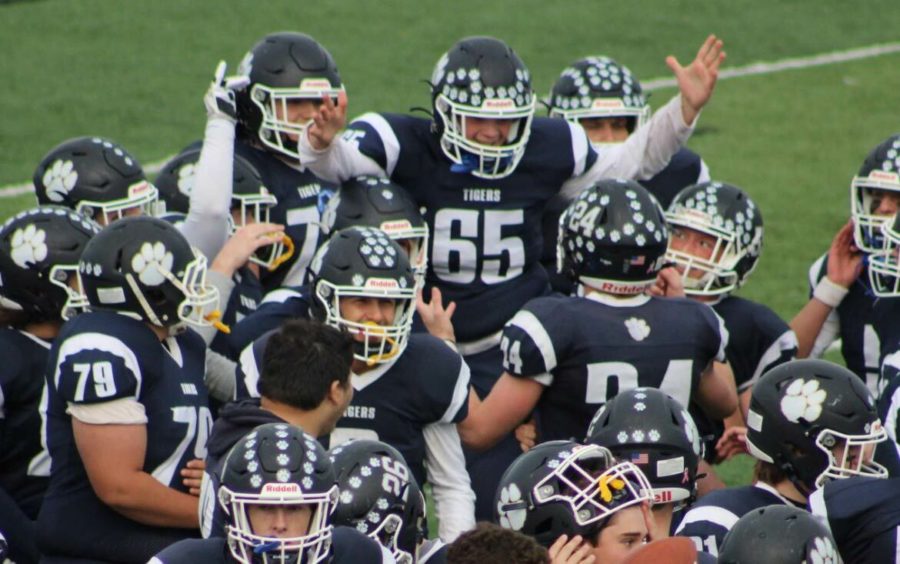 The day started out as a soggy season closer with the potential for an ugly game, but the game between the Tigers and the Smithtown West Bulls ended with a sunny day and a game winner in the final seconds.

The day started out as a soggy season closer with the potential for an ugly game, but the game between the Tigers and the Smithtown West Bulls ended with a sunny day and a game winner in the final seconds.

The actual majority of the game was filled with runs, as the usual ground-and-pound game was accentuated by the rain. Luckily, the Bulls did not seem to get the memo. On just their second offensive play, and the first pass of the opening drive, senior linebacker Dylan McNaughton intercepted the ball to give the Tigers incredible field position. Jackson Campbell finished the ensuing short drive with a rushing score.

The Bulls did recover, as a great catch by Jack LaPrarie ended up tying the game at seven. The kickoff back to the Tigers was the first instance of an attempted plan by Smithtown West to shock Northport. They performed a sneaky onside kick, the first of three in the game. Unsurprisingly, the Tigers recovered each kick.

After scoring on their first drive, the Tigers offense slowed. Quarterback Owen Johansen pulled off a huge scramble to the other side of the field, but the Tigers opted to go for it on fourth down at the 30-yard line over an attempted field goal, which would have been risky. They did not convert, giving Smithtown the ball.

The next Tigers drive ended terribly, as a botched snap to the punter and the following tackle gave the Bulls the ball on the thirteen. This is when Johansen made his best play of the game — on defense. He absolutely lit up the opposing quarterback, energizing the crowd. It unfortunately would not last long, as LaPrarie soon caught another touchdown.

LaPrarie made his presence known on the scoresheet, and not just by scoring both of Smithtown’s touchdowns. He intercepted a pass in the endzone to conclude a promising Tigers drive. Northport bounced back on their next one, which ended the first half. A pass to Jack Helrigel got them to the eight, and Dan Eagers ran in for a score after just missing one on the previous scoring drive.

Both teams made all of their extra points, so the marching band came out during a 14-14 contest.

Compared to the first half, the second was far less exciting, even with better weather. The second drive of the half for Northport had a great start, with a terrible finish. Campbell ran it to the 27-yard line, but Johansen was sacked on a play that left him injured. Backup Patrick Sweeney could not make the fourth down pass. The teams grinded out the third and fourth quarters, trading punts and turnovers on downs.

The Tigers caught a massive break as an inexcusable fumble from the Bulls was recovered by Ryan McEnroe, whose earlier interception was ruined by a failed drive. The Tigers continued to do what they had done since Johansen went down, which was split carries between Campbell and Eagers, then repeat.

As the clock hit two seconds (yes, two) and the Tigers got to within ten yards of the endzone, all eyes gazed onto kicker JJ Ahlstrand. Ahlstrand missed a deeper kick to give the Tigers the lead on the prior drive. This one would guarantee a win, a miss sending them to the unknown horrors of overtime. Thankfully, we didn’t have to find out what that extra time would bring. Ahlstrand’s kick was well in the uprights as the team stormed the field from the kicker’s left.

The 17-14 win set a great tone for the Halloween weekend. For the Tigers, it propelled them into the fourth seed of the Division II Tournament. Next for Northport will be on Saturday, November 6 at Tiger Stadium, with fifth seed West Islip coming to town.