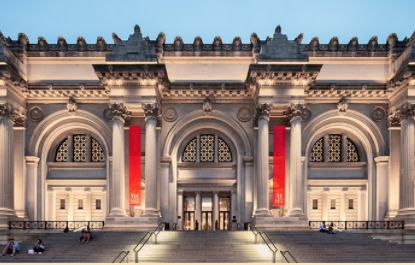 To tourists from all over the world, the Metropolitan Museum of Art is a must-see when visiting New York City. There is no question as to why — the Met offers beautiful paintings, ancient artifacts, and astounding architecture. If you are an art fanatic, a history buff, or just someone who enjoys looking at all of its stunning pieces, the Met has something for you.

As someone who lived in New York City for their entire life until just last year, I have had a membership to the Met for most of my life, and have been so many times that I can’t even count. For this, I am so grateful. The Met is how I formed a real appreciation for art and an understanding of how to explore and enjoy museums.

In my opinion, the Met is a fascinating place, but I have heard too many people say that “museums are a waste of time” or remarks like, “don’t even bother, it’s just some boring art.” Going to the Met does not have to be as boring as one may think it is, you just have to know where to look.

With its large windows, geometric patterns, and boxy furniture, one look at the Frank Lloyd Wright Room could tell you all you need to know about its creator, Wright, a famous American architect. Wright designed over 1,000 structures in his lifetime and they all have a distinctive style, which this room embodies.

One interesting fact about this room is that the room itself was constructed  in 1907 as part of a larger house for the Little family of Minnesota. However, by the 1970s, the Littles could not maintain the house. They decided to have it demolished, leading a group of Wright enthusiasts to alert the Met. The museum agreed to buy the living room, and thus, carefully transported the pieces to the room it sits in now. This took a tremendous effort, though today the exhibit is one of few period rooms at the museum that displays nearly all of its original furnishings.

This backstory sets the scene, and when visitors step into the room, they can almost instantly envision the Littles sipping their tea by the brick fireplace, a child reading a book in one of the large armchairs, or someone hunched over their work at the wooden desk. This room provides a wonderful experience for anyone who enters, and it is a gem of the Met’s collection.

Many people are not strangers to Pollock’s paintings — their chaotic splatter, random drips, and frenzied colors. Pollock was one of the major figures of the abstract expressionist movement, and his work continues to inspire many artists today. It is no surprise that his art is featured at the Met, as it is so well known.

This particular piece is humongous. It stretches to just about 17 feet wide and 8 feet tall. There is so much to look at. When I took a tour, a guide mentioned a small red dot on the painting. It is tiny compared to the large canvas, so you have to look closely. It is like finding a needle in a haystack, or rather, it is like finding a tiny red dot in a sea of browns and grays and blacks. In addition to its treasure hunt qualities, the painting’s smallest details (the patterns of the splatter, the faint boot prints, etc.) are prevalent and important to pay attention to.

This intricately carved wood dome draws the eye upward, to a ceiling where the details are almost overwhelming. Winged creatures, blooming flowers, and ornate scenes fill up the space of the wood, with some features smaller than a pinky nail. It is an amazing piece that must have taken painstaking skill to carve by hand. In fact, the Met believes that it was once painted.

For something that must have taken so much effort to create, it might surprise you to learn that this carving was discarded during a temple’s renovation project. However, the Met took it into its collection, and now it sits in a corner of the museum, where you can look up and admire the beautiful carvings.

All of these places aren’t included in the main attractions of the Met, but they’re certainly worth seeing to get a new perspective. Visiting the Met isn’t all about seeing a Vermeer or a Van Gogh. It’s about appreciating the details, the effort, and the care in which each art piece is created or even the care that it took to move the art pieces to the museum. In my opinion, the most impressive thing about all of these pieces is not that they are nice to look at, but that they each have a story that they are just waiting to tell.